In October, I participated in the 2014 Scientific Assembly of the American College of Emergency Medicine in Chicago, an annual gathering of physicians, businesses and educators that I have been attending since 1974. It is always interesting and since my first meeting, which I filmed as a physician-filmmaker, I have been fascinated by the continual evolution of a great specialty that does so much for the health care of this country. At the first scientific assembly the exhibitions consisted of a demo of a CPR machine called “The Thumper” and a device called a “G Suit” (which was purported to aid in maintaining a hypovolemic patient’s blood pressure. So much has changed in this specialty over the past 40 years when we started it. We have over 160 Emergency Medicine resident training programs, board certification and continually increasing patient volumes. The 2014 scientific assembly’s exhibits by staffing companies, inventors, application vendors, medication manufacturers took up the entire Chicago Convention Center’s main auditorium! Big, complicated, important business. 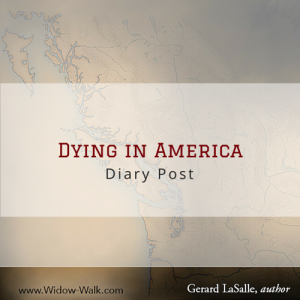 On the morning of the third day there, I had the pleasure of meeting for breakfast a brilliant emergency medicine physician colleague and long time friend. His first name is Tom. I hadn’t seen Tom for a few years. He walked to the cafe, a remarkable accomplishment…because Tom is struggling mightily with the terrible effects of various therapies used by the medical establishment to treat an undifferentiated brain cancer that first presented itself over five years ago. Tom has been battling this undifferentiated tumor and the aftermath of his therapy valiantly and with great hope. He has perspectives on the patient-physician relationship that can only come from a physician who has become a patient. And he has always been a brilliant observer and teacher. I was impressed with how well he coped with his iatrogenic (i.e. induced by medical care) maladies, including a profound ataxic gait and a paralysis of his right face. He had a fresh scar with flap-stitches on his bald head from an intrathecal infusion of chemotherapy he had received the previous day. As always, he was optimistic and eloquent. It was wonderful to see him and terrible to see what he was suffering, and I mused afterwards to myself that most folks would have given up with all with which he is contending. But not Tom.

Serendipitously, later that day I was approached by two other physician-filmmakers, Mark Brady MD, and Don Stader MD while I was standing in line at the convention center’s Starbucks. They just had produced a definitive documentary on emergency medicine called “24-7 The Evolution of Emergency Medicine”. They knew about “Diary of a Moonlighter” the documentary I had produced in 1975…(the first one ever on emergency room medicine, and which played on PBS on the forerunner of the P.O.V. series). They asked whether I might be interested in working with them on a new documentary project. It’s working title is “Dying in America.” After listening to their description of what they envision, following several patients through their final years of life, I realized that they needed to meet my friend Tom. So we invited Tom to join us, and all had lunch together. We agreed to all work together, with Tom possibly being the first person we followed.

We were prepared to begin filming Tom in the first week of January, but he was hospitalized on Christmas Eve with a meningitis, likely related to an infection of the stent for his chemo.

He is back at home now. We will film Tom.

This is a documentary that needs to be made…and with it we intend to precipitate a national dialogue on the subject…one which we all avoid and as a result, squander opportunity for decent, thoughtful evolved policy and processes that ease the burden of the inevitable.

More to come on this project and Tom in future diary entries.