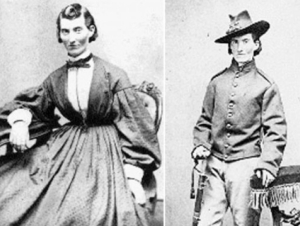 One of the characters our Emmy Evers meets in Book Three of the Widow Walk Saga, The Fairness of Beasts, is a young woman who disguises herself as a Union soldier in order to be close to her lover. 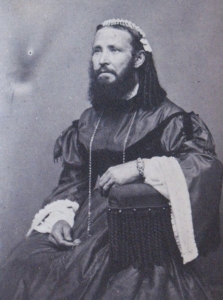 Cross dressing was not uncommon. Although both the Union and Confederacy forbade women to enlist and women distinguished themselves nobly and notably by their volunteer and nursing activities, there are over 250 well-documented accounts of women on both sides of the conflict who volunteered and served as combatants disguised as men in the infantry or cavalry. Cynthia Vogel, in her book Civil War Women recounts several stories, including vignettes of Bill Thompson of the 18th North Carolina Infantry who was really Lucy Matilda Thompson, and Albert D.J. Cashier of the 96th Illinois Infantry, who was really Jennie Hodges. Vogel notes that many women who were discovered to be dressing as men and thus, were mustered out, simply moved to other areas to serve in different regiments. Louisa Hoffman served in both the Confederate and Union armies, first with the 1st Virginia Confederate Cavalry and, after fighting in both the First and  Second Battles of Manassas, later joined the 1st Ohio Infantry.

Men also cross-dressed, in most circumstances, usually to avoid combat, but also as a means to effect espionage.

General Nathaniel Lyon, the first general to be killed in the Civil War, allegedly disguised himself as a farm woman to spy on the Missouri State Guard’s actions.

Read the first chapters of my award-winning novel, Isthmus, for free right now.