Many people have asked about the beautiful medallions that adorn the covers of the first three books in the Widow Walk saga.   Who did them?  Why did you choose to use them?  How were they created?  What do they represent?

The talented Randy Mott of Mott Graphics (MottGraphics.com) is the designer of the medallions.  When we first started working together, I suggested incorporating onto the cover something that included the beautiful argillite carvings of the Haida Pacific Northwest totems.  As we moved through various iterations, we decided that the sculpture should contain First Nation symbology representative of the totem-spirits of the book’s main characters: Emmy, Anah-Nawitka, Isaac, Pickett and Jacob.  This is what we arrived at: 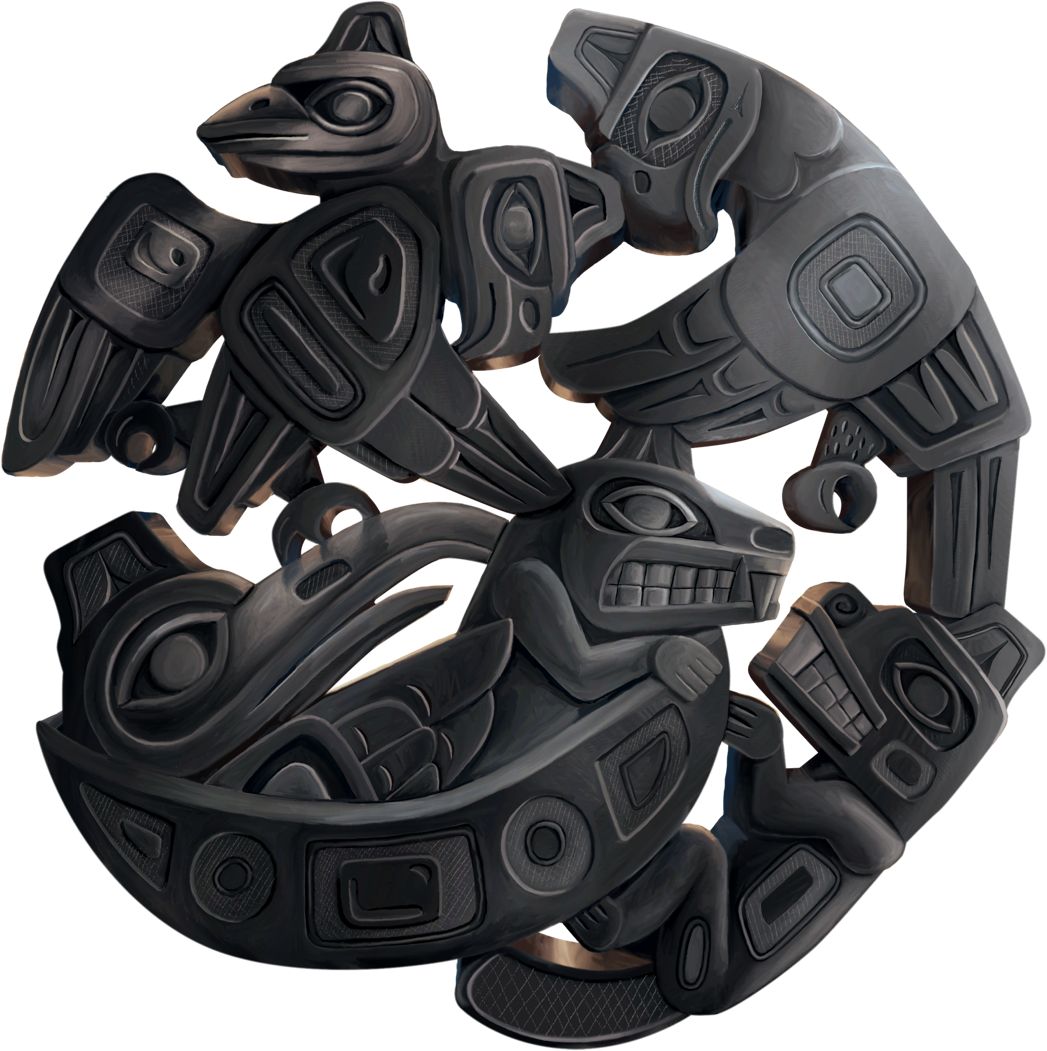 In the long boat of the Northerners sits the Raven (Anah) and the “Little Wolverine”  (Jacob) – his kidnapped captive.  Beneath the boat is the industrious but hapless Beaver (Isaac).  Flying over the long boat in pursuit is a two-headed bird – a dove-hawk (Emmy-the-mother, Emmy-the-fierce protector).  Close by Emmy, and with a visage of the same ferocity, is the Eagle (Pickett).

When Neil Gonzalez (Greenleaf Book Group) created the second cover for Widow Walk, we agreed that it would be important to keep the medallion as part of the overall design.  I also decided to incorporate the medallion as a design feature for each chapter.

The cover, of course, needed to be similar in style to the award-winning version that Neil and Randy created for Widow Walk.  When the galleys for Isthmus were near completion, I again approached Randy Mott who read the book and had several ideas about the type of sculpture we might use for the next medallion.  We both studied Inca, Aztec and Panamanian indigenous art.  I visited the NY Metropolitan Museum of Art and other exhibits in Panama.  Randy, who is also a jewelry designer,  began learning the techniques of repoussé gold and copper sculpture, the technique used by the Panamanian peoples of the pre-Spanish era.

Although most of what was likely exquisite gold repoussé was destroyed when the Spanish conquistadors invaded the isthmus and enslaved and exterminated the native population, some examples do exist. We again decided that the medallion sculpture we incorporated into Neil Gonzalez’s next cover should be in the style of the indigenous peoples and contain symbology representative of the book’s main characters – in this case: Emmy, Bocamalo, Runnels and Brett.  This is what we arrived at: 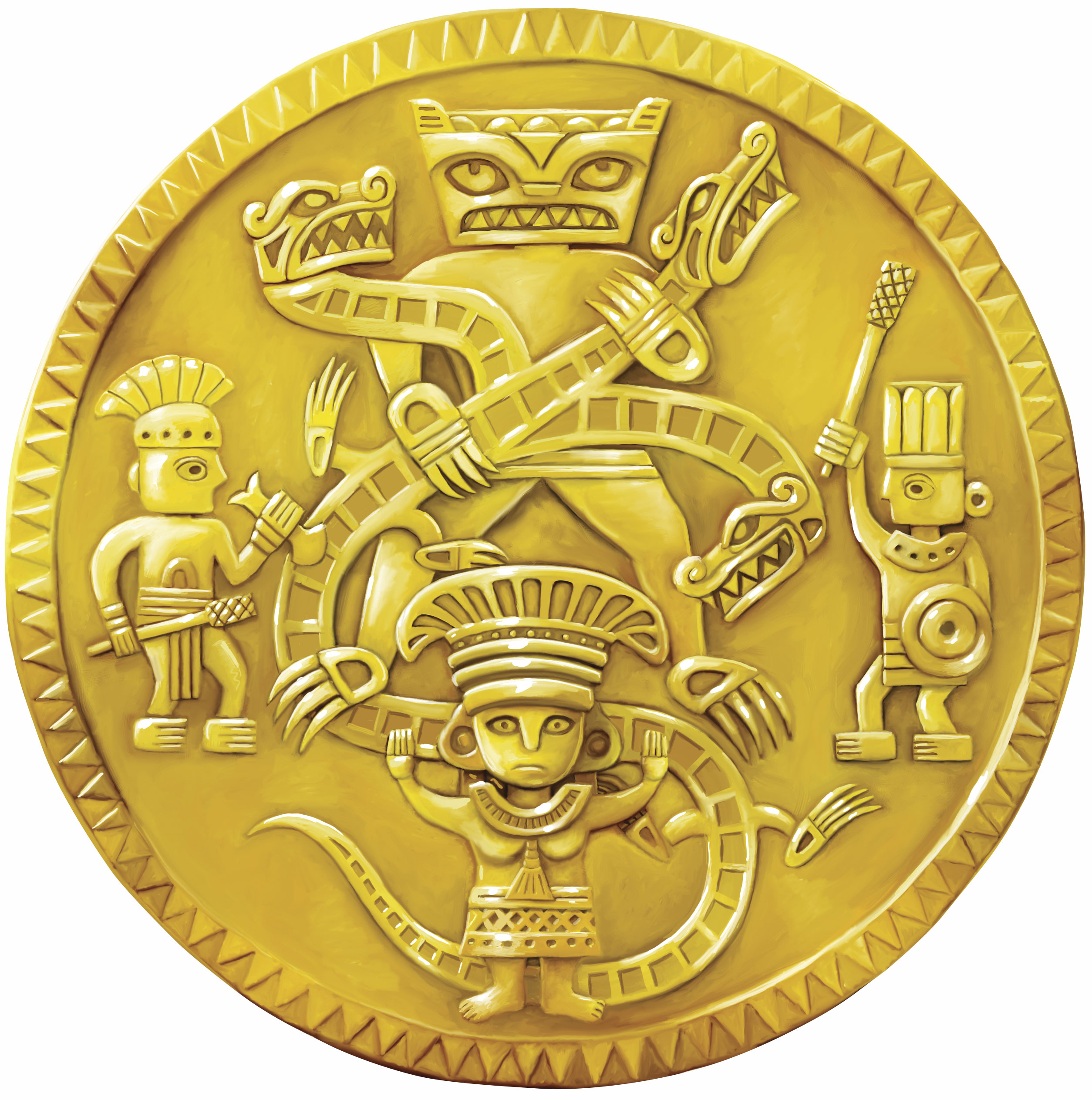 The large monster in the middle (Bocamalo) is fighting his psyche, a devil-serpent with three heads: Anger, Lust and Agony.  On the left, (his right) is the physician (Brett), holding a scalpel.  On the right (his left) is the warrior-hunter (Runnels).  Standing on the serpent’s tail (like the Virgin in Renaissance art) is the madonna figure (Emmy).

The Fairness of Beasts

Many of my readers participated in a poll that helped us choose the cover by Neil Gonzalez for the next book in the saga.  To be consistent with the previous two book covers, I wanted to incorporate a medallion in the design.  Randy Mott read The Fairness of Beasts and suggested that we use a medal, similar in style to that awarded during that era.  However, because the book is really about the horrors rather than the heroics of war, we agreed that the imagery was appropriate to that concept.  Randy and I studied medals and ribbons.  He suggested incorporating an avenging angel into the design.    In this iteration, Randy used Z-Brush for the first time.  This is what we arrived at : 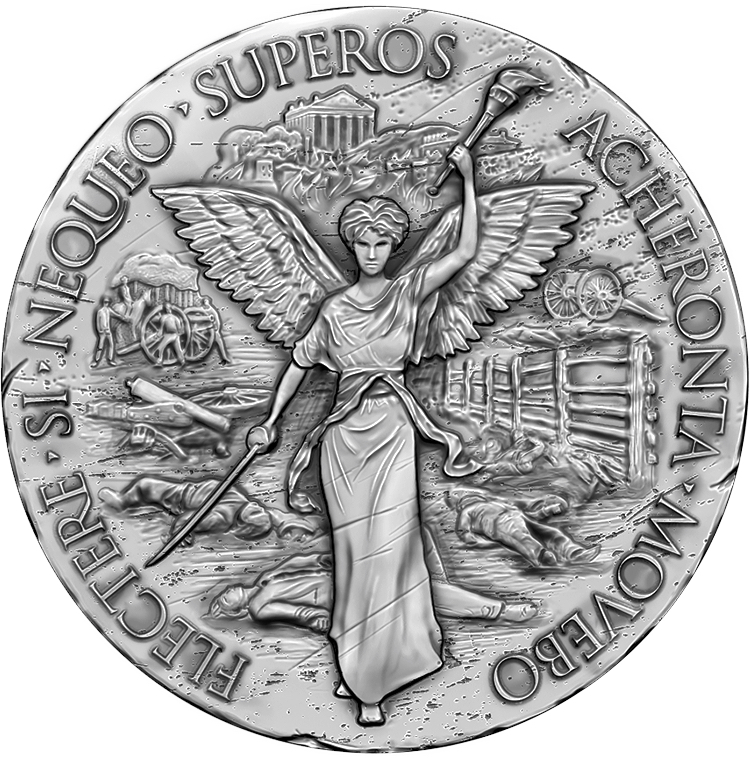 The main character, the angel, a fierce, strong, determined being who carries a saber and holds up a torch symbolizing truth, is much like Emmy, the main protagonist of the saga.  The angel is surrounded by the residua of war, including corpses (from Matthew Brady’s battle photographs) torn fences, broken cannon and a city under siege.  The motto: “FLECTERE SI NEQUEO SUPEROS ACHERONTA MOVEBO” is from Virgil’s Aeneid – roughly translated: “And If I cannot bend the Gods above, I will move hell.”  Fitting to that which was endured in the American Civil War.

Fitting to what our story is about in book III.