I am pleased to announce that the first edition of Widow Walk has been selected as Finalist for Historical Fiction in the  2013 Indie Excellence Awards.

As I mentioned in my last entry, both the British and US desired control of the Pacific Northwest’s strategically located San Juan Island, the ownership of which was placed into dispute by an ambiguity in the 1846 border agreement between the two countries. Negotiations continued for thirteen months and concluded in June of 1859 unresolved, with both sides claiming sovereignty over the island.  The Brits established a Hudson Bay Company station for sheep farmers on the Island.  Isaac Ebey, our Isaac Evans, convinced the Oregon Territory government to promote the settlement of US citizen settlers there.

In June of that year, Lyman Cutlar, an American farmer who had moved to San Juan under the US Land Claim Act, discovered a large black boar pig rooting in his garden.  This was not the first such episode.  The pig’s owner, Charles Griffin, an Irishman employee of Hudson’s Bay company allowed all of his 100 pigs to roam free.  Cutler shot the pig and killed it. Griffin was furious, and demanded compensation. Cutler offered to pay Griffin ten dollars.  Griffin demanded one hundred.  Cutler withdrew his offer, noting that the pig had trespassed.  Griffin then demanded that his American neighbor be put into chains to be tried in a Vancouver British Court.   Cutler asked the U.S. for military protection.

One month later, having recognized that this incident might provide a convenient provocation for the British to seize the island, the U.S. Oregon Territory commander, Brigadier-General William S. Harney ordered a small company commanded by Captain George E Pickett to establish a military presence and hold the island at all costs.  James Douglas, the governor of British colony of Vancouver Island, responded by dispatching three large frigates with British marines to land and seize the island.

The events created a whirl of speculation and gossip in anticipation of an armed conflict between the two nations.  Local journalists called the standoff “The Great Pig War” and gave the determined Pickett his second instance of national fame.   I love the character of Pickett, who, as you can see from this photograph obtained from the Valentine Richmond Museum collections ( www.richmondhistorycenter.com ) was a determined and confident young man. 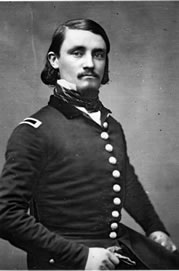 It is 4 am…the best time for me to write, working on Widow Walk’s sequel.  Resting for a few days after trekking across the country to present patient safety information to my company’s divisional medical directors.  Good people doing good work as emergency physicians, hospitalists and anesthesiologist in demanding circumstances and complex environments.

Looking back, I have been very fortunate over many years to be supported by a terrific, loyal team of directors, creative artists, informaticists, lecturers and technicians.  When we do inventory of all that they accomplish, I am astonished and extremely proud.  As an internal, true story we tell ourselves about ourselves, our 8000 providers deliver excellent care to over 12 million patients annually while at the same time maintaining the lowest rate of adverse outcomes and claims in the entire health care industry.  Looking to the future, we are about to deep dive into the analysis of our own “big data” and from that, provide our docs and advanced practice clinicians with focused, form-fit education.  Pretty cool.