While I’m putting the finishing touches on the the manuscript for book III, The Fairness of Beasts and it is making its way through the wilderness that is editing, proofreading, and printing, I wanted to bring together the two gifted artists who worked with me to create all three of the Widow Walk saga covers.  The following discussion with them should give you a fair glimpse behind the scenes to see what it takes to create a great cover.

What it takes to make a great book cover 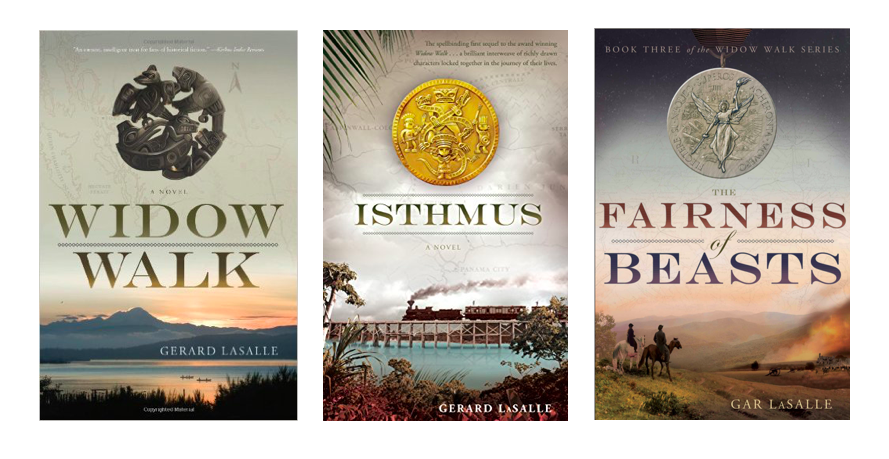 I’m honored that the original Widow Walk cover won the USA Best Books Award 2013 – Best Cover.  Creating it would not have been possible without the beautiful work of Randy Mott and Neil Gonzalez.

Randy Mott is the founder of Argentum Arcana and Mott Graphics, and he has designed a unique medallion for each of the three book covers in the Widow Walk saga. It is always a pleasure to work with him. Randy has been awarded many honors in his 25 year career as a jewelry-maker and graphic artist, including 2 Print Magazine Certificates of Design Excellence: one for an invitation to Bill Moyers’ PBS lecture on Joseph Campbell and the Power of Myth and another for an Austin City Limits Gala event. You can see in the medallion designs his understanding of sculptural “presence.” To see the jewelry he is crafting these days, do yourself a favor and go to Argentum Arcana.

Neil Gonzalez, head of design at Greenleaf Book Group, has also worked with me on all three of the Widow Walk saga covers and I cannot thank him enough for crafting a consistent look and feel that does justice to the theme, tone, and overall composition of the books. He has designed hundreds of covers, including Wall Street Journal and New York Times bestsellers, and it is my honor to continue working with him.

It was quite evident to me in working with them and seeing their work, that they carefully read the literature, understood the historical context, the pathos of the characters,  and symbolic meanings (intentional and unintentional) contained in my novels.

Artist’s Chat: Behind every great cover is an amazing untold story

In my opinion, a great book cover is  an integral part of the work itself.  It must “seduce” – to attract the type of reader who will likely enjoy the work, and at the same time honestly convey one or more resonating themes that are contained therein.  But not all book covers do justice to what is contained inside. That’s why we spent as much time working on this as we did – discussing concepts, colors, themes and structure, and testing options with audiences (readers familiar and unfamiliar with the work).  As noted above, all that work paid off.

It took us about 9 months to put together the first cover, and because Randy, Neil and I became a good team, it has taken less time to create the next two.  Each one is a story unto itself.  Most people think that covers just kind of flow out of the author or the artist, but in reality the first cover took no less than a dozen concepts, dozens more conversations, and plenty more nitty-gritty nuances of getting a cover just right.

00:00:00 Introductions and Background
17:30 Early designs for the Widow Walk cover
26:48 The role of Haida art in inspiring Randy’s medallion design and the overall cover design
40:45 Neil’s approach to integrating the manuscript themes as a whole and the medallion design into a final cover design
1:03:24 The story behind the cover of book II:  Isthmus
1:18:15 The story behind the cover for book III: The Fairness of Beasts
1:32:30 Conclusion

Here’s a copy of the slide deck used in the video:

And here is a clip from the 1914 movie “In the Land of the Head Hunters” that features on that first slide, recreating what it was like for those on the shore to have “the Northerners” invade. This gives you an idea of what it must have been like for Emmy and the others in Widow Walk.