The holidays are a time to gather together with family and friends and celebrate. This year has been a joyful one for me as an author — Book III was published by Solipsis (along with revised and updated versions of Book I & II) and Widow Walk was optioned by Heyou Media. 2018 promises to be even more exciting as video production shifts into high gear and I begin researching and writing Book IV.

To celebrate all of this, I’m giving away some of my favorite Widow Walk pieces as gifts.

It’s all my way of saying thank you for being a reader and supporting this saga.

The happiest of holidays to all of you, 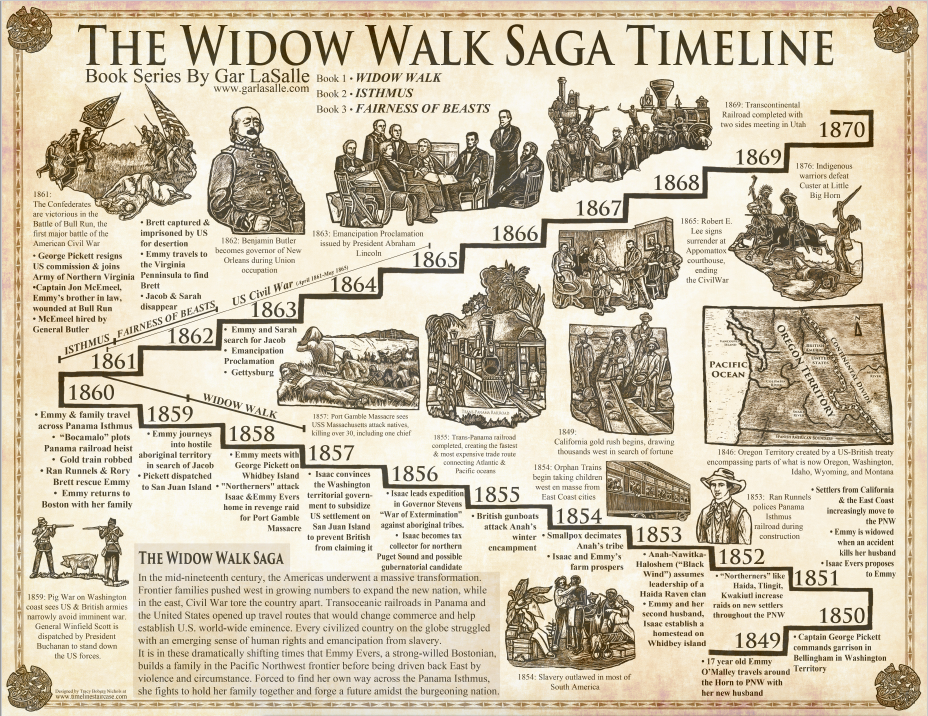 In the mid-nineteenth century, the Americas underwent a massive transformation. Frontier families push west in growing numbers to expand the new nation, while in the east, Civil War tore the country apart. Transoceanic railroads in Panama and the United States opened up travel routes that would change commerce and help establish U.S world-wide eminence. Every civilized country on the globe struggled with an emerging sense of human rights and emancipation from slavery. It is in these dramatically shifting times that Emmy Evers, a strong-willed Bostonian, builds a family in the Pacific Northwest before being driven back East by violence and circumstance. Forced to find her own way across the Panama Isthmus, she fights to hold her family together and forge a future amidst the burgeoning nation.

3 Stories that inspired the saga

“The true Emily Ebey lived with her husband Isaac on Whidbey Island. What inspired me to write about her were what I found in her diary. She described the bleakness of the [Pacific Northwest] terrain in the wintertime, and write about her loneliness. She had to manage the area during the wintertime while Isaac was away.

During the mid 19th century, women were often treated as second or third class citizens… when they were every bit as capable and perhaps moreso than the men of the era. The Emmy that I have created in the book is a composite character of what I think likely existed in many of the women… when they had to be strong as all get out in order to survive in that time.”

“Ran Runnels, aka El Verdugo, was a Texas Ranger and bandit hunter. He rode with Jack “Coffee” Hayes, the most famous Texas Ranger of the era. When the Panama Railroad was being built, the area was easy prey for bandits and robbers. The local authorities convinced Ran Runnels, then “retired” to go into the jungles of Panama to fight the marauders.

He set up [in Panama] as a mule transport owner… but what he really did was “kept book.” He would go into the taverns and the bordellos and listen to the stories of people who would talk about the heists and robberies of the gold and of the passengers who were moving on the railroad across the Isthmus.

One night, with a group who were later called the Isthmus Guard, they gathered up a group of 35 or 36 people in Panama City, and, without a trial, hung them on the parapets of Panama City. When the robberies started up again 6 months later, he did the exact same thing in Colón. The fear of Ran Runnels, aka El Verdugo, was widespread.”

When I started doing more research into the characters who would be living there in the 1860’s, I became fascinated by the subterranean passageways that pre-existed the subways.”