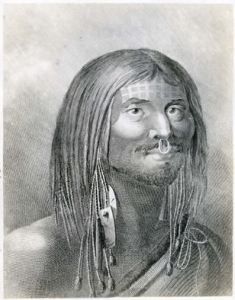 from Voyage of Discovery to the North Pacific Ocean, 1798, The Journal of Captain George Vancouver

Royal BC Museum’s First Peoples Gallery offers more about the history of these tribesmen.

Anah-nawitka is a composite character, drawn from accounts of several notorious clan leaders with whom the British and Americans contended in their appropriation of “aboriginal” lands. Conflict between the cultures was inevitable, with ample provocation and rationalization for each side’s escalation of violent retributive actions. James Douglas, the aggressive and enterprising former Hudson’s Bay Company director and first governor of British Columbia, used the same tactics in taking land as had his British counterparts in taking New Zealand aboriginal land. Isaac Stevens, the first Washington territorial governor, advocated the “extinction” of Native Americans.

Antoine Bill and Rene Marte are composite characters of “Me’tis”—a mixed “breed” of French Canadian and indigenous native parentage, who participated in the exploration, trading, trapping, and interpretative needs for the British and American explorers.

The Jesuit priests are fictional. However, Christian missionary work throughout the Pacific Northwest, particularly that of the Jesuits, is well documented to have promoted pacification of indigenous tribes in the region.

The character of Marano Levy is a fictionalized version of a legendary wandering Hebrew man who purportedly travelled the region looking for the lost tribes of Israel.