SHOPPING FOR A TYEE

“Both of the visitors looked at Isaac carefully from foot to head, as if measuring him, Emmy noticed. The woman, weather-beaten and almost toothless, repeated the request, adding that she wanted to buy some sugar or molasses and coffee. Emmy sensed a nervous, stilted manner in their speech and heard a dry sticking hesitancy in the man’s enunciation of the Chinook. Isaac paused, glancing over at Emmy, then told the couple that they did not have a hammer or nails nor did they have any food supplies to spare. So the couple turned and left quietly without a word. Rowdy finally stopped barking when they were out of sight down the pathway to the beach. Isaac thought no more about it. Natives and wayfarers occasionally stopped, and none had ever created problems. Emmy thought that the couple was odd but turned her attention to the dinner she was preparing.” 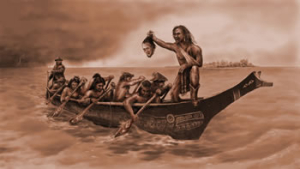 “As soon as the Haida rowers got within hailing distance of the fishing village a mile away from the larger lumber vessels, they began chanting and beating their oars against the sides of their canoes. They fired two shots, which rumbled across the still water, breaking the morning’s peace. As curious Lummi natives and white settlers emerged half-awake from their shacks, the Haida began hollering and jeering. Anah, in the lead boat, held up Isaac’s bloodless head and screamed, “Tyee. Tyee.” The long boats then paddled out of the harbor moving northward. They repeated this at every village they encountered along their trek toward the rendezvous point near the mouth of the Campbell River.”

Additional resource: In the Land of the Head Hunters