Who Were “The Northerners” of the Pacific Northwest?

Who Were “The Northerners” of the Pacific Northwest?

In 1844, a schooner called “Pigeon” was found adrift, empty and burned out, off of Maury Island in the south part of the Oregon Territory’s Puget Sound. The craft’s seven man crew was never found. Natives in the area attributed the disaster to an early morning attack by the “Northerners” who came on longboats. 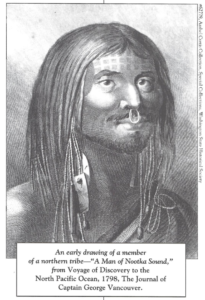 WHO WERE THE NORTHERNERS?

I myself first heard about the Northerners when I fished for salmon during a summer with the Lummi Indians off of Lummi Island in 1970. I heard similar stories from the Suquamish and Salish tribes when I moved in 1978 to Maury Island. A common theme in their stories was about marauding head-hunting slavers who swept down from the north, raiding villages all along Vancouver Island, Puget Sound and down the coast as far as northern California.

Every tribe with local roots has these stories about having to contend with “The Northerners,” but when I would ask them who “The Northerners” were, everybody would just point north and say, “they came from up there.” It’s likely that “the Northerners” was a name indigenous tribes and settler used as an umbrella term to talk about any raiding tribe that came from beyond their shores. Various tribes, including the Haida, Tlingit, Kwakiutl, and Kake, have been implicated in many stories about them. 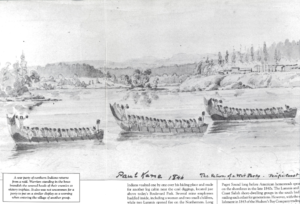 Northerners typically navigated in huge cedar dug-out long boats that could carry up to 40 to 50 warriors, moving swiftly through the many waterways in the Sound and beyond. “Northerners” could out-run sailing ships of any settler fleet, so efforts to catch them were always unsuccessful. There are, in fact, no documented instances in which a sailing ship apprehended a Northerner longboat.

THE NORTHERNERS AND THE ARRIVAL OF SETTLERS

Picture the Pacific Northwest in 1856. Its majesty stretched as far as the eye could see, with an intricate and seemingly infinite patchwork of land and sea. Gigantic Cedar, Fir and Spruce evergreens pushed all the way to the water. The native populations enjoyed a rich environment, the forests providing a habitat for abundant wildlife, the waterways teeming with fish, the shoals filled with oysters, clams, geoducks and mussels.

“When the tide goes out, the table is set,” was a popular native and early settler saying. 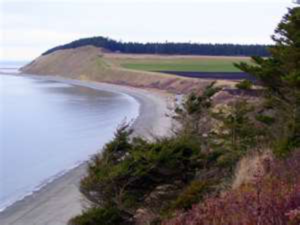 The Sound’s protected coastline offered an ample number of harbors for sea-borne trade.  Yet there were few ships coming in and out of the numerous natural ports because in 1856,  only 5,000 non-natives lived in the Puget Sound area of the Pacific Northwest. The indigenous population is estimated to have numbered somewhere around 100,000 at the same time, even after 65 to 95% of all Northwestern natives had been killed diseases like influenza and malaria, smallpox over the preceding century as a result of colonization.

The families and settlers who lived in the area, like the Ebey’s I write about in the Widow Walk saga, had a delicate and precarious relationship with the people native to the land. Staking a claim to land was especially dangerous at that time, and not just because they were well beyond what Americans typically think of as the frontier. Even if they could stake a claim, build a house, and farm the land, they had to contend with a constant fear of “The Northerners.” 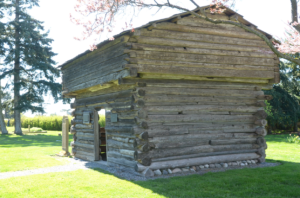 To protect their homesteads, settlers built stock houses to harbor themselves in case of an attack. Many stock houses still exist in places like Whidbey Island and the American Camp on San Juan Island, standing centuries later as testament to their fear. Many settlers avoided living on the coast to reduce the possibility of being attacked by these marauders.

The introduction of durable goods by settlers into the region changed longstanding dynamics of trading. Implements like iron and copper utensils for use in farming, milling, fishing and other trades were attractive new bounty. Firearms especially were coveted for their military and raiding advantages. There is a story that one industrious “Tyee” (the local word for leader) outfitted his cedar longboats with small cannons to gain the advantage in raids.

But goods and weapons were not the only things that the Northerners were after – they were also after humans. Slave trading was common among native aboriginal peoples long before the arrival of European and American settlers, and many of the warring regional tribes had long participated in slaving raids on each other.  Slaves were traded, along with other stolen property, at “potlach” celebrations. 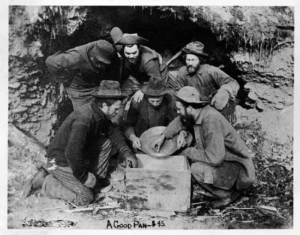 With the discovery of gold in Fraser Canyon in 1857, the non-native population dramatically increased, within less than a year bringing at least 30,000 new settlers from San Francisco, Colorado, and beyond streaming into the area, chasing the promise of quick riches. This influx increased the frequency and intensity of the clashing of cultures, intensifying the inherent battle between cultures.  Both the British and American local governments initiated campaigns of extermination of the aboriginal peoples, which in turn, increased the ferocity of the raiding Northerners.

There is a character I named Anah who is a violent aboriginal leader central to the early events in Widow Walk.  I’ve been asked in interviews whether his actions were representative of any specific group in particular, or whether the behavior manifest by him and his clan was an accurate depiction of the mores of aboriginal cultures.

While Anah is not a single historical figure, the deep motivations that drove his rage and insanity, including his raiding murder of Isaac Ebey, were certainly fueled by the debilitation of his people’s existence, intentionally or by happenstance, and by the appearance of another powerful tribe – European settlers. New settlers competed for the same terrain and resources, and Anah’s anger, retaliation, and deadly revenge is representative of one of the reactions indigenous peoples had to the growing European incursion.

Anah is depicted as having a predisposition for violence ready to be triggered, and his elders pushed him repeatedly. But the larger point is that we typically see violent, not peaceful, assimilation of one culture’s values by another. When cultures clash, blood spills. Always.

THE END OF THE NORTHERNERS 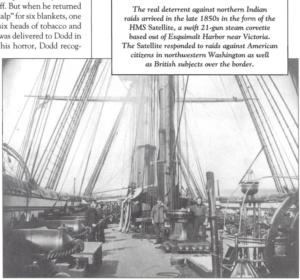 Coastal attacks from “Northerners” continued well into the mid-nineteenth century, but as with all things, the march of time eventually brought a weapon even “the Northerners” could not outrun. In this case it was the gradual introduction of steamer gun-boats, which didn’t rely on wind power had the potential to chase down longboats.

With the end of the American Civil War in 1865 and the completion of the Transcontinental Railroad in 1869, population of settlers in the Pacific Northwest rapidly increased. Coupled with the magic of technology for weapons and vessels, the influence and dangers of “the Northerners” quickly declined.

Today, the only reminders we have of these once deadly and feared men are stories told over fishing poles and stock houses that stand, even now, against the cold and quiet Pacific Northwest nights.