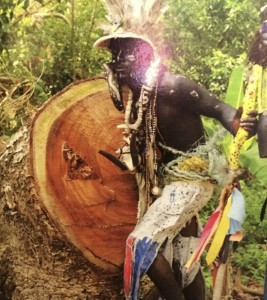 The Cimarron (Cimaroons) were Congolese African slaves who escaped from the Spanish in Panama and lived in the forests of the Darién Gap. Masters of camouflage and known for their cunning ferocity, for hundreds of years, they and their descendants preyed on the travelers of the Camino Real and the Rio Chagres, allying themselves on numerous occasions with English buccaneers and French pirates in order to plunder Spanish gold trains. In 1625, the Spanish abandoned the port of Nombre de Dias in favor of better-protected harbors. The Spanish governor ordered the leg of the Camino Real to that town permanently destroyed to reduce the likelihood that the French and English might use it. The jungle quickly overgrew the path, but it is likely that the Cimarron kept their knowledge of that route. 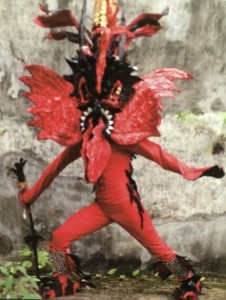 The “Festival Congo de Diablos” is an annual Panamanian-Caribbean celebration of the escape from Spanish slavery. When descendants of the Cimarron are asked about the identity of the “Diablos”, the answer given by many is “the Conquistadors.” Starting in the ’60s, with the increased influence of Christianity in the region, tradition has changed… the mock fights between the Cimarron and the Diablos now end in the streets of Portobelo and Nombre de Dias when baptismal holy water is sprinkled onto the devils, at which point the devils are transformed back into human beings.