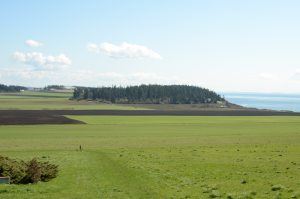 It has been rumored that spirits haunt the fertile Ebey plateau.

Some have said that on moonlit nights, looking southward from the crest of the tiny cemetery where the headless body of Isaac Ebey is interred with those of many other mid-nineteenth century Whidbey Island settlers, a pale specter can be seen crossing east to west to the landing and beach below.

In 1851, when less than 1000 non-native settlers lived in the Puget Sound region of the Oregon Territory, Ohio-born Isaac Neff Ebey moved onto Whidbey Island to begin farming his 640 acre homestead claim. The one square mile of rich black alluvial soil, once the bottom of a Pleistocene era ice-age lake, made up half of the fertile plain that still bears his name.

By his early 30’s Isaac Ebey had accomplished much. He surveyed many areas in the region, including Lake Washington, and was elected colonel of the county militia. He outfitted and led a company of volunteers to Eastern Washington to assist the military in the 1856 Indian Wars. Afterwards, he served as regional tax collector and prosecuting attorney for the northern counties. He had pushed the territorial government to help U.S. citizens settle on San Juan Island in order to counter British claims to that strategically important island. His prosperous farm provided beef and other provisions for the military in both Port Townsend and Bellingham. By all accounts, he was a very successful young man with a bright future. Some suggested he be considered a candidate to unseat Governor Stevens. The diary entries of Isaac and his wife Emmy from 1857 all convey a picture of energetic, hard working, and earnest people.

Six years later, his home was attacked in the middle of the night. Isaac was shot down and then beheaded on his doorstep. The “Northerners” who reputedly assassinated him as retribution for an unrelated event that had occurred earlier in the year, paraded Ebey’s “tyee” head along the Puget Sound coast for several weeks. Outraged, terrified citizens demanded retribution. They constructed numerous block-houses throughout the region to protect against the predation of Northerner raiders. Local newspapers reported that natives were hanged in Port Townsend. 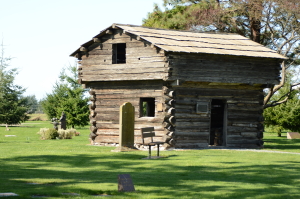 Block House built on Ebey’s Landing after the massacre

I am doubtful that the native men who were executed after the Ebey massacre were the true perpetrators, and it is doubtful that the unknown “Northerners” were ever identified. For many years the Haida of the Queen Charlotte Islands (now Haida Gwai), Skidegate and Tlingit were blamed. One story claims that the Ebey raid was led by a woman warrior, possibly from a small clan of southern Alaskan Kake. There is no recorded testimony verifying that allegation either.

Various accounts note that Ebey’s friends and family unsuccessfully negotiated with intermediaries for the head’s return so they could put it to rest with his remains in his grave that overlooks his farmstead. Several years later, when a tanned, skin-mask was finally retrieved in exchange for some wool blankets, Winfield, Ebey’s brother, confirmed that the grisly skin-mask was indeed that of Isaac.  The skin-mask, however, apparently was never put into Isaac’s grave but instead was passed on to various relatives. By last account, Isaac’s mask now sits in a distant relative’s bureau drawer in San Francisco. 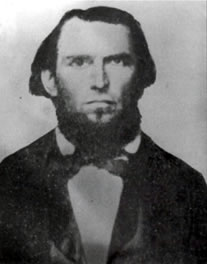 The ‘Ebey Plateau and Landing’ was the first trust to be named a historical reserve in the United States.