Our publisher has asked that we add study questions for both Widow Walk and its sequel, Isthmus. Ten of the following questions are included in the paper back and e-book versions of Isthmus. 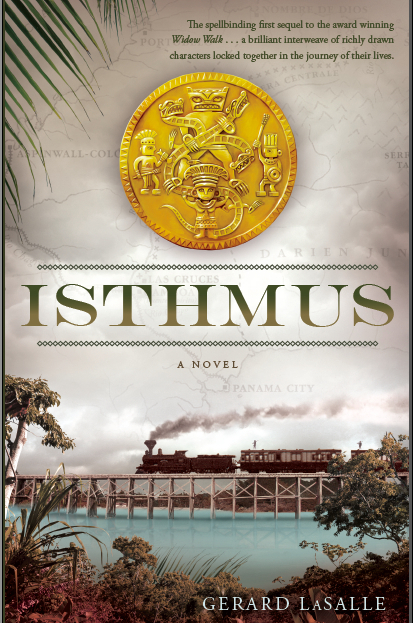 The first sequel to the award-winning novel, Widow Walk

1. The 1849 discovery of gold in California dramatically increased the travel across the Panamanian isthmus.  For several years, the local economy flourished with the increase of coast-to-coast travelers and cargo. What was the impact on the local economy of the region when the railroad was completed? What was the impact of the high tariffs imposed by the railroad on travelers and natives of Panama?

2. Why did “The Watermelon War” erupt and what is its significance to the North American white and ex-slave cultures that were involved in it?

3. What is the “Dia del Diablo” and why is it celebrated in Portobelo and Nombre de Dios? What is its relationship to colonialism and slavery?

4. What do you think the caves of the “Old Ones” represent to Bocamalo?

5. What were the mid-nineteenth century medical theories about causes and therapy for the diseases that killed so many railroad construction workers and travelers in the isthmus?

6. Who was Garibaldi and why was the Italian “Risorgimento” so fascinating to the world in 1860? How is it related to slavery and women’s rights?

7. The character of Emmy in Widow Walk has been compared to that of Scarlett O’Hara in Gone with the Wind. Emmy faces different challenges in Isthmus. How is her response to the events in Isthmus consistent or different than in Widow Walk?

8. Do you think there is justification for the actions of Runnels? Of Bocamalo?

9. Describe the characters of Runnels, Brett and Foil.

10. Imagine yourself, as one of the captives of killers like Deacy and Bocamalo. How would you plan to survive?

1. The isthmus of Panama is only forty-seven miles wide at its narrowest. What prevented convenient travel across it?

2. What other routes existed to move cargo and passengers from the Atlantic to the Pacific Oceans?

3. How many people traversed the isthmus in the decade after its discovery?

4. How expensive was it to travel or move cargo on the railroad pathway during 1860? How much would that be in inflation adjusted currency? How were those prices decided upon by the railroad owners?

5. What did the railroad company do with the bodies of deceased railroad construction workers?

6. For what reasons related to Islamic jihad was the discovery of new world gold especially important to the Spanish?

7. How did the Spanish transport their Inca, Aztec and Panamanian gold across the isthmus to the Caribbean?

8. What is the Camino Real? What was the significance of the towns of Cartegena, Nombre de Dios, Portobelo, Colon and Veracruz to the Spanish?

9. Where was the headquarters of the Spanish Inquisition in South America? What was the significance of the conquest of Europe by Napoleon on the Inquisition? What happened to Jewish communities in Spain and Italy after Napoleon’s defeat at Waterloo?

10. What is the difference between a “cleft lip” and a “cleft palate” and how does that distinction play a part in Isthmus?

11. Slavery had been banned in many South American countries by the mid-nineteenth century. Which countries continued allowing slavery and how did that impact the building of the pan-isthmus railroad?

12. What was the “Mingello” as depicted in Isthmus?   Why was the Mingello dangerous?

13. Why were the miners transporting their gold to southeast US mints, bypassing the new mint in California?

14. How did Opium cause the deaths of so many Chinese workers in Matachin during the construction of the railroad?

15. What was The Watermelon War’s impact on Panamanian-U.S. relations?

18. Why did the railroad company hire the Comanche fighter, Ran Runnels in 1852? How did he become known throughout Panama as “El Verdugo”?

19. Who were the secret “Isthmus Guards”? Why were they feared and hated by the Darienni and Cimaroons?

20. Who were the “Old Ones” (the Cueva people) and what is the significance of their extermination by the Conquistadors?

21. Who were the Waunaan, Embera and Kuna aborigines?

22. What is the annual rainfall in the tropical forests of the Darién and what is the significance of that to the story?

23. What is the significance of the Chagres River (pre-canal and post canal) and why is it unique amongst all rivers of the world?

24. Which future U.S. President lost half of his military command crossing the isthmus of Panama?

26. Who were the “Wide Awakes” and what was their impact on the politics of the United States immediately before and after the firing on Fort Sumter?