At the request of our publisher, we are adding a reader’s guide with questions for discussion groups and book clubs. Ten of these have been added to the forthcoming paperback edition of Widow Walk. 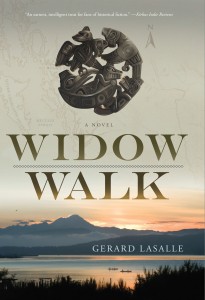 1. Widow Walk has been compared to Last of the Mohicans and Cold Mountain. How is this story similar to those historical fictional works?

2. Emmy Evers in Widow Walk has been compared other fictional women like Scarlet O’Hara in Gone With the Wind. How is Emmy alike and how is she different than Scarlett and other strong female protagonists in literature?

3. In 1858, only 5000 non-native settlers had moved to the Pacific Northwest. It is estimated that over a hundred times that number of First Nation people lived along the coast at that time.   Imagine that you were a non-native settler or a First Nation inhabitant. How would you behave if you saw strangers arrive at your home?

4. Conflict between the new settlers and First Nation peoples was inevitable and sometimes violent. Expansion of population into new territories was important to both the U.S. and Britain. Was the “jingoism” as manifested in the mid-nineteenth century American and European history beneficial or destructive?

5. What was the impact of the missionaries in Pacific Northwest history?

6. The responses of the white governments and native peoples to the massacres as depicted in Widow Walk were frequently harsh. Were they justified?

7. What is a “Potlatch” and why was it important to the Pacific Northwest First Nation tribes? Why did the white governments and missionary eventually outlaw the Potlatch? How is the Potlatch in the twentieth and twenty-first century different than the tradition as originally celebrated? Is this good or bad?

8. What is a totem and what is its importance to Pacific Northwest First Nations peoples? What is the significance of the animals depicted in Widow Walk? Who is Raven God in Pacific Northwest native lore? Are there similarities between these archetypes and those found in other cultures?

9. Imagine your family is expecting the birth of another child during the mid-nineteenth century in Pacific Northwest. How would you prepare for this event? Why did so many women die during and after childbirth in the nineteenth and early twentieth century?

10. The predatory actions of Anah against white settlers and other tribes as depicted in Widow Walk can be interpreted as “sociopathic”. How dependent on a society’s economy is its management of sociopathic behavior?

11. The character of Isaac Evers, one of the protagonists in Widow Walk, is based on the prominent settler Isaac Ebey, who lived on Whidbey Island and was killed in a retribution massacre. Two years before Isaac organizes a company to fight in the Yakima Wars of 1857-1859. Who was Kamiakin? What was the Wright Expedition? What is the impact of that expedition on Isaac in Widow Walk?

12. What was the outcome of the attacks on Bellingham and Elliot Bay settlements (now Seattle)? Who was Chief Leschi? Why was he later hanged?

13. What other massacres occurred in the mid-nineteenth century Pacific Northwest?

14. Were kidnappings of females and children a common occurrence during the mid-nineteenth century Pacific Northwest?

15. If slave trading already had been banned as a commercial enterprise by the British in 1860, why did it continue in many parts of the British territory?

19. What was the “Pig War” and how did George Pickett distinguish himself in it?  What might have happened had President Buchanan not sent General Winfield Scott to intervene in the international dispute?

20. How did the Mexican War have an impact on the settlement of the Pacific Northwest?

21. What was the impact of gold discovery in the Fraser River Valley of British Columbia?

22. What was the “Chinook” language? Why were the diverse languages of the PNW aboriginal tribes barriers to settlement?

23. What is the significance of the tattoos and body adornments worn by the aborigines as depicted in Widow Walk?

24. Was the land appropriation by the British and American governments unprecedented? How did the British secure land from the New Zealand and Vancouver aboriginal peoples? What was the significance of this in Widow Walk?

25. Who were the “Northerners?” Was predation and war amongst the various clans common?   Where are the Queen Charlotte Islands and what is their significance in Widow Walk?

26. Describe the impact of smallpox and measles on the tribes of the Pacific Northwest? How did this play a role in the story of Widow Walk?

27. Describe the art of the Haida and other Pacific Northwest First Nations people. What is Argillite?