In anticipation of the publishing of Isthmus, the second book in the Widow Walk Saga, I believe it is helpful to describe some of the historical characters who are part of Isthmus. 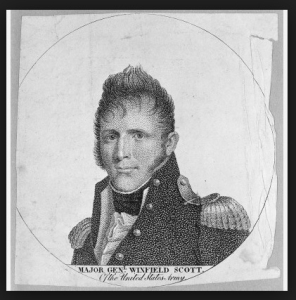 Major General Winfield Scott – after the War of 1812 victories

General Winfield Scott was, before the American Civil War, the most famous and celebrated military commander since Andrew Jackson, having achieved fame as the result of his leadership and prominent victories in both the War of 1812 and the Mexican-American War. He ran unsuccessfully for the office of president twice, running as the Whig Party’s candidate in 1852, losing in the that election by 300,000 votes. Considered a brilliant tactician and strategist by admirers, but also arrogant and pompous by many detractors, he was known by his own staff as “Old Fuss and Feathers” because of his insistence on disciplined decorum and grandiose displays of protocol. 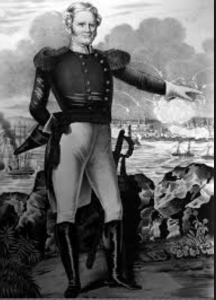 Scott portrait at time of the Mexican War 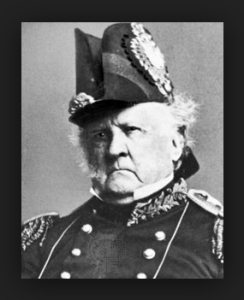 He was  a very big man, and by his later years weighed over 380 pounds, necessitating pulleys and ropes to hoist him onto his horse. He is reputed to have frequently fallen asleep during meetings, likely due in part to a pathology that is now called “Pickwickian Syndrome”, or “Obesity Hypoventilation Syndrome”  a condition in which severely overweight people fail to breath rapidly or deeply enough resulting in low blood oxygen levels and high blood carbon dioxide (CO2) levels. Some detractors said he was cat-napping again while sitting at the telegraph desk as reports came in from the Union defeat at the First Battle of Manassas.  His nickname by that time had become “Old Fat and Feeble.”

In 1859, Scott traveled by way of the Isthmus to the San Juan Islands of the Pacific Northwest to intervene in a confrontation and prevent a dispute over territory from escalating into a full scale war between the United States and Great Britain.  (Captain George Pickett, as you will remember from Widow Walk, had been assigned there to prevent the British from seizing the island).  After that successful intercession, Scott’s entourage traveled to San Francisco where he was honored in numerous sumptuous celebrations by the citizenry, militia and the military. His party traveled back via the Isthmus Railroad to the East Coast as tensions increased over the prospects of war that might result if the southern states seceded from the Union. 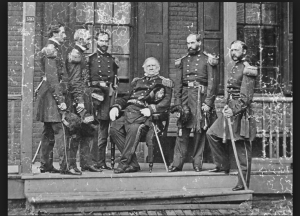 Scott traveled with an extensive entourage

Scott predicted that a military conflict would be potentially ruinous for the country. He knew that the Union was unprepared for such a terrible event, for under President James Buchanan, Scott’s U.S. Army and Navy had been reduced in number to less than 16,000 active military personnel scattered all across the vast U.S. territory. When war did begin after the firing on Fort Sumter in South Carolina, Scott was asked to commanded a newly formed 75,000 man army composed mostly of inexperienced volunteers.  Almost half of the experienced and trained officers had resigned their commissions, including Robert E. Lee, Thomas Jackson, Albert Sydney Johnston, Joseph Johnston and George Pickett, to join the Confederate Army. 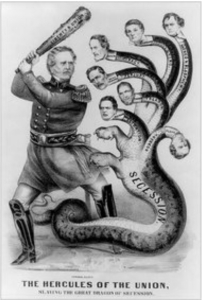 There were rumors at the beginning of the war that Scott himself, a Virginian, might leave the Union to join his home state’s newly formed army.  However, he was an ardent proponent and defender of the Union and the rumors had no merit.   War always presents great temptation for the ambitious and the opportunists.  Despite his extensive battle experience and repeated diplomatic successes, Scott was criticized and ridiculed as being a relic of the past.  There was also enormous pressure on Lincoln from numerous factions to end the war by marching the new army onto Richmond.  Over Scott’s objections, Lincoln approved a plan to take the Confederate capitol with an inexperienced army.  After the disastrous U.S. Military’s defeat at the battle of Bull Run, Scott, then 73 years old, was forced to resign and was replaced and retired by President Abraham Lincoln. 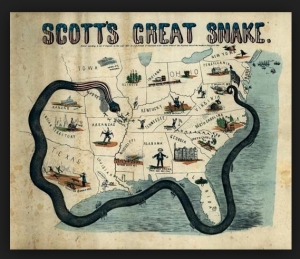 However, it was Scott’s “Anaconda Plan,” a strategy named perhaps, by what he saw on his travels across the isthmus of Panama, that Lincoln followed which ultimately resulted in the defeat of the Confederacy’s secession. The strategy entailed naval blockade along the entire Southern and Gulf of Mexico coastline, the capture of New Orleans and the seizure of important ports along the Mississippi, and the destruction of rail lines and supply sources.

Scott would have traveled back across the isthmus of Panama about the same time that Emmy Evers and her family took the train as noted in Isthmus.

I encourage you to read Widow Walk as a prequel to Isthmus, which is scheduled to be published this winter.