The Camino Real of Panama

The Camino Real of Panama 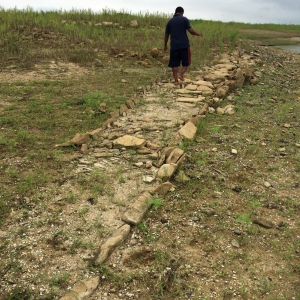 This past week I traveled with Christian Strassnig the director of Cultour (www.cultour.info) and Camino Real Project (http://caminorealproject.wordpress.com) into the Jungle of the Chagres National Park where he, his colleagues from the Instituto Nacional de Cultura and the mestizo peasant community recently recovered portions of the Camino Real, a paved four-foot wide road that was for perhaps thousands of years, the most important trade route in Central America. The trail, likely originally created by pre-Columbian Isthmus aboriginal Cueva people, traversed 100 kilometers across the Isthmus of Panama from the Pacific to the Carribean Atlantic oceans. A second, alternatively used trail that reached Panama City from Gamboa, the Camino Las Cruces, spans a shorter distance from Panama City to the ancient town of Las Cruces on the Chagres River. 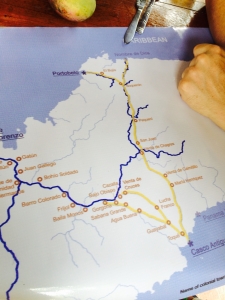 The Spanish, utilizing enslaved aboriginal and African labor, paved the road with perpendicularly placed limestone and volcanic flagstones. They maintained it for three hundred years until 1821 when Spain was forced to give up most of its Central and South American colonies.  When the Panama Canal was created a good portion of the southern road from Panama City into the National Park was submerged under what is now an artificial lake and reservoir for the canals. The aggressive flora of the jungle took over the rest of the road and only through the great efforts of Mr. Strassing and INAC have portions of the road been rediscovered. It was very clear to me that maintenance of the road must have been a continuous burden, affordable likely only with the forced free labor of slaves. 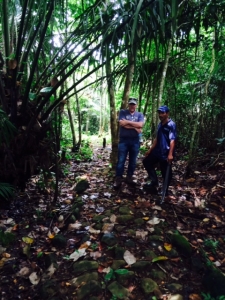 Walking up and down steep hills for several hours through a semi-cleared portion the dense jungle we saw multiple artifacts from the Spanish colonial occupation, such as rusted iron mule-shoe fragments. Unglazed pottery shards are mixed in the debris all throughout the trail indicating that the trail was used by native populations for their commerce. The pottery has been identified as Pre-Columbian, supporting the theory that this is an ancient trail. Mr. Strassnig described the discovery of four Clovis-era arrow heads by the archaeologist Junius Bird and Richard Cooke in the 1970 as well as other stone implements, which would place the Camino Real’s use back seven to ten thousand years.  The jungle is wild and dangerous.  We found jaguar tracks and tarantulas.  It is extremely easy to lose one’s bearing and become lost…irretrievably.

The Spanish used the trail for their mule pack trains to carry colonial supplies to and from Panama City and to two end points on the Caribean at Nombre de Dios and later at Portobelo. They also transported Inca, Aztec and mined gold, silver, jewels and other riches to their galleons for transfer in their galleons back to Spain.

We will learn much about the Camino Real in Isthmus, the first sequel to Widow Walk in the Saga.  For those who are interested in this history or perhaps scheduling a four day hike through the jungle on the trail guided by Mr. Strassing, I encourage you to visit the www.cultour.info, website for cultural community tourism of the Camino Real or http://caminorealproject.wordpress.com, the preservation initiative’s website.